In the midst of the WikiLeaks hosting saga, it was only natural that I should start following WikiLeaks on Twitter. I remember saying at the time, "I'm probably on some government list now." 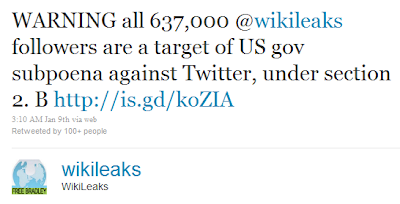 This stems from a DoJ court order compelling Twitter to reveal information about some of its users. The slight paranoia blog provides a good analysis of the order.

Essentially, anyone can see what is being tweeted by WikiLeaks, simply by browsing to http://twitter.com/wikileaks. Twitter won't be able to identify people who access this page through an anonymising proxy, so of course, the DoJ won't even know about those followers.